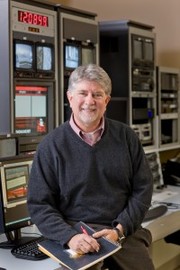 "It's always a highlight of this job to recommend anything from the gifted filmmaker and state treasure Larry Foley--anything from The Lost Squadron and The Buffalo Flows to The First Boys of Spring."
Michael Storey, Arkansas Democrat Gazette

​Veteran broadcast journalist, educator and documentary filmmaker Larry Foley is professor and chair of the School of Journalism and Strategic Media at the University of Arkansas. In 2017, he was inducted into the Mid America Emmy Silver Circle for a distinguished career invested in teaching, reporting, writing, producing and directing stories, mostly about his beloved home state of Arkansas. Foley was honored because he personifies the spirit of innovation, passion, creativity and commitment that are hallmarks of excellence in television arts and sciences.
Foley’s films have earned eight Mid America Emmys from the National Academy of Television Arts and Sciences, and 23 Emmy nominations in writing, journalistic enterprise, history, cultural history, special program and community service. His films have also received four Best of Festival of Media Arts awards from the international Broadcast Education Association.

Foley’s documentary credits include The Favored Strawberry, The First Boys of Spring (MLB Network/Fox Sports Networks), After the Tsunami, The Art of Crystal Bridges, Up Among the Hills, Growing Hope, Bridge to War Eagle, Sacred Spaces-The Architecture of Fay Jones, The Greatest Coach Ever, Beacon of Hope-The Story of the University of Arkansas, Charles Banks Wilson-Portrait of an American Artist, The Forgotten Expedition, It Started Here: Early Arkansas and the Louisiana Purchase, 22 Straight, Arkansas’ Natural Heritage, Out of the Woods, The Keetoowahs Come Home, The Black Swamp, The Governor from Greasy Creek, Arkansas-A Special Place, Hell on the Border, The Pine Bluff Story, The Little Rock Story, The Conway Story and Natural, Wild & Free.

Foley joined the faculty at the University of Arkansas in 1993. He is founder of the campus television station UATV, and has been inducted into the Lemke Alumni Society Hall of Honor and the Fayetteville Schools Hall of Honor. He is winner of the University of Arkansas faculty research award, Fulbright College Master Researcher award, the Individual Artist Governor’s Award from Arkansas Arts Council, and the Henry Award from Arkansas Parks and Tourism.
​
https://youtu.be/MLR00oqj6F4

Foley began his television career in 1977 at KATV Channel 7, covering Southeast Arkansas as Pine Bluff Bureau chief, and host of Good Morning Arkansas. He spent 7 ½ years at KATV, working as a reporter, news assignment editor, morning news anchor and host, and sports producer. Foley joined Arkansas Educational Television Network in 1984 as senior producer, writing, directing and producing films about Arkansas’ natural and cultural heritage.  In 9 years at AETN, he worked his way up the ladder, becoming Director of Production, Director of Programming and Production, and finally Deputy Director, the network’s number two position.